OXSIGHT user David Quigley was one of the first people in the UK to have an OXSIGHT device. His sight has been seriously reduced for more than 20 years, and he currently only has a very small portion of his central vision remaining. He describes the difference that the glasses have made to his life, “One of my best moments was sitting in the church and being able to see my niece’s face on her wedding day, which I never would have been able to do without my OXSIGHT glasses.”

The OXSIGHT glasses are fitted with a camera which streams a live feed into two high resolution video displays. These screens are projected directly in front of the user’s eyes and the images displayed are manipulated to fit into the user’s area of useable vision. This can allow someone with peripheral sight loss to experience a full 68 degrees field of view. The glasses have seven modes, with features including: increased image contrast, super colour mode, textmode, edge enhancement, and a digital zoom to allow users to magnify the image seen. 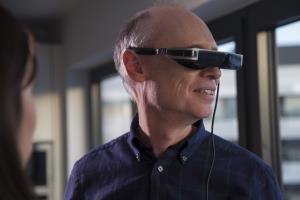 OXSIGHT was founded by a team at the University of Oxford, including Dr Stephen Hicks, a leader in the field of augmented reality and computer vision for the enhancement of sight. The founders set out with the aim of finding a way of using the new developments in augmented reality and computer vision to make a real difference to the lives of blind and visually impaired people. OXSIGHT launched its first two smart glasses devices, OXSIGHT Prism and OXSIGHT Crystal, in the UK in 2018.

Both OXSIGHT Prism and OXSIGHT Crystal are registered medical devices and are dispensed by qualified Opticians following a detailed assessment and product demonstration. Funding is available through Access to Work, as well as through a 0% finance plan.

OXSIGHT is a leader in image interpretation technology and has developed a range of low vision glasses for people with sight loss. The Company was founded in 2016 by a team at Oxford University; whose research was into how the brain manages visual information. OXSIGHT has since established partnerships with globally recognised partners from both the sight impaired and technology communities including, Google, The Royal National Institute of Blind People (RNIB), Guide Dogs Association, RETINA UK, The University of Oxford, NIHR i4i, and The Royal Academy of Engineering.

The first device, the OXSIGHT Prism smart glasses, were launched in 2018, and OXSIGHT is in the process of developing clinical partnerships with a number of Opticians across the UK and Europe. At present OXSIGHT is already providing assessments, fitting, and clinical support at their clinics in London, Oxford, Durham and Scotland through several clinical partners.

Funding support for OXSIGHT devices is available through the Government’s Access to Work scheme, as well as through a 0% finance plan. Contact OXSIGHT for more information.