UCan2’s Jenni Meredith on the legacy of disability activist Professor Mike Oliver, and the future of disability rights in the UK under new Disabilities Minister Justin Tomlinson as Brexit looms...

In March this year, Professor Mike Oliver, a fiery disabled activist and the man who changed mainstream attitudes with his social model of disability, sadly died.
He was the person largely responsible for forcing the UK Government to adopt anti-discrimination legislation in the form of the Disability Discrimination Act (DDA), yet was disappointed with the Act when it finally appeared on the statue books.

The DDA used the medical model to label each of us as a set of symptoms, but at least the “reasonable adjustments” part of the current Equality Act pays heed to the social model.

However weak, unenforceable and divisive the DDA was, it was the foundation for current equality and anti- discrimination legislation and is the reason that today we can, if we have the stamina and the cash, challenge workplace discrimination in UK law courts.

But despite the gains made by direct action campaigners such as Disability Action Network in the 1980s, we do seem to be almost back at square one with some private employers discriminating on a daily basis and recently even the DWP, a Governmental Organisation no less, forced one of their disabled employees to seek justice via litigation.

It is a tragedy that the Government breaks its own legislation. But at least that puts us firmly in the non- discriminatory zone. After all, Governments regularly break their own rules in plenty of other areas too. 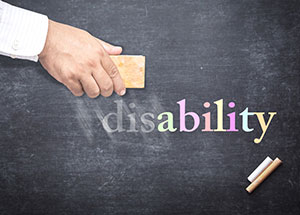 The DWP lost a case brought against them by a staff member, a DWP case officer in fact, who claimed the DWP had not made reasonable adjustments concerning his mental health.

This claimant was dismissed from his post in 2017 after several months of struggling with the conditions under which
he was asked to work. He went through various legal procedures for two to three years and In the summer
of 2018 the tribunal reserved Judgement on four counts, pending further investigation. Finally, this Spring, the judge ruled
that the DWP had not sufficiently taken into account their employee’s depression, and should have allowed him to work flexible hours to relieve the stress of having to arrive and leave at inflexible specified times.

The employee was awarded £35,000, which sounds great, until you consider the stress this man was forced to endure for
a prolonged period, the
loss of income he suffered during that time and any legal costs he might have had to pay upfront, now that it is so hard to get Legal Aid. Money can never restore the damage done by disabling and discriminating attitudes. Additionally, how many of us would have the stamina to fight such drawn out court cases?

Ironically back in 2017 the DWP was in the negative limelight yet again for telling their case officers to discriminate against people with mental health issues when assessing PIP payments. This official DWP guidance

came just before their case worker with mental health issues was dismissed with unsatisfactory reasonable adjustments made, and just after a tribunal ruled that people needing mobility help due to psychological issues were entitled to the same help as those with physical issues.

What effect is Brexit having on disabled people’s rights? One problem, of course, is that due to institutionalised prejudice, any laws adopted are also likely to be biased and prejudiced. So we have a situation where Governments adopt legislation that prohibits certain types of discrimination and yet those laws themselves are discriminatory.

Take for example the issue of equal pay. There are changes in the pipeline as the Government consultation on ethnicity pay reporting closed this January. But all MPs and Whitehall officers are snowed under with the ever-evolving Brexit leave date, so we shouldn’t apportion too much blame if the responses to the consultation have so far been left without action.

But it is interesting to note that the consultation was on the introduction of mandatory pay-gap reporting where ethnicity is concerned, yet gender inequality of pay and disability inequality of pay will remain with voluntary pay-gap reporting. These laws come under the heading of anti- discrimination legislation, yet they demonstrably discriminate.

And despite being told late March that due to Brexit debates the vacant post of Disabilities Minister would be left unfilled, only eight days later another announcement gave us the new minister’s name; the replacement for Sarah Newton being arguably disablist, as demonstrated by his voting record. He has often, and usually, voted against laws to promote equality and has consistently voted against higher benefits for those unable to work due to illness or disability.

Just the sort of minister we need?