Charity Distributes 5,000 Items of Winter Clothing to Homeless and Vulnerable People in Birmingham, Glasgow and Manchester

Human Appeal, a UK Muslim-faith based charity, have announced that they have distributed 5,252 items of winter clothing to homeless and vulnerable people across Manchester, Birmingham and Glasgow as part of their Wrap Up 2018 campaign. Human Appeal have asked members of the public across the three cities to donate unwanted coats for vulnerable people, such as rough sleepers and people living in shelters, and have collected a record breaking total. This is the third year that Human Appeal has run Wrap Up Manchester 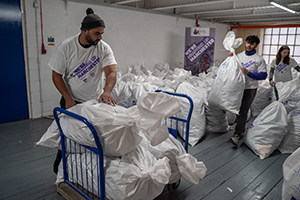 and the second year it has run Wrap Up Glasgow and Wrap Up Birmingham.

The campaign is done in partnership with flexible volunteering focused charity Hands On London, who have been running Wrap Up London for eight years this year and are, at the time of writing, still sorting their coats collected in London. The campaigns were supported by Safestore, Collect Plus and Network Rail who provided venues and methods across the three cities for people to donate unwanted coats.

“We are touched that so many people across these three great cities have responded with such generosity and kindness this winter. These items of winter clothing won’t just warm a heart but they could change a life. Human Appeal are working with our partners to distribute these coats, gloves, hats and jumpers on these bitterly cold nights and hoping we can help them with advice whilst we distribute the items. We want to say a huge thank you to everyone in Manchester, Birmingham and Glasgow who has donated to Human Appeal’s Wrap Up 2018 campaigns.”

“2018 is the third year that Human Appeal has joined in Partnership with HandsOn London and have delivered the most heartwarming campaigns in Manchester, Birmingham and Glasgow. The generosity of people in these cities has been truly amazing. Everybody who has donated a coat or given their time as volunteers have helped change the lives of thousands of the most vulnerable people in these cities.”