A graphic design graduate once labelled lazy by teachers is hoping to publish a stunning graphic novel to help people understand how people with dyslexia see the written word.

Sam Barclay, who has dyslexia, graduated from the University of Portsmouth in 2013 with a first class BA in graphic design and a commendation from the International Society of Typographic Design.

He went on to work with London based Make Architects, designed road bikes for UK based retailer Wiggle, and has published two graphic design books.

Sam says he hopes his new book, I Wonder What it’s Like to be Dyslexic? Will help people understand visually how dyslexics experience the written word.

Sam said: “About 17 per cent of the population suffers from dyslexia and I Wonder What it’s Like to be Dyslexic? will help everyone from employers to 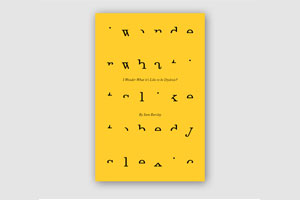 parents understand visually the personal struggles dyslexia brings.
“I was inspired to write this partly because when I was at school, at parents evenings, Mum and Dad were often told by my teachers that I was lazy. Teachers would say ‘What do we do with a boy like Sam?’ and ‘We call him Lazy Bones’. Experiences like this – a common misunderstanding that many with dyslexia will recognise – are included in the book to help fellow dyslexics and parents relate to the struggles they face.

“I hope the book challenges myths, creates awareness and ultimately helps stop another kid from being called ‘Lazy Bones’.”

Sam’s first book, ‘I Wonder What it’s Like to be Dyslexic?’, published in 2014, received worldwide press attention and was lauded by educators for his typographic experiments in a visually stunning, large-format book.

His second book, ‘I Wonder What it’s Like to be Dyslexic?’ was published in 2015.

All his books have been funded via crowdfunding.

To find out more and to order the book, visit: https://www.kickstarter.com/projects/sambarclay/i-wonder-what-its-like-to-be-dyslexic-iii