A part-time inventor whose design for a special needs trike for children caught public attention earlier this year says progress is being made to bring the design to a global market.

Les McMahon and his trike shot to prominence in June when the media reported he is working with designers at Insync Bikes in Manchester owned by India’s Hero Cycles, the world’s biggest bike maker by volume, to perfect the trike he has engineered for his young neighbour.

Media reports on the trike included BBC TV North West which has been seen nearly 500,000 times on BBC News’ Instagram with a further 85,000 views on BBC NWT’s official Twitter feed with scores of comments praising Les’ caring gesture. Meanwhile a Manchester Evening News report has received more than 700 likes and 70 comments on the MEN Facebook page praising the idea.

Les said the special needs trike, which will be much cheaper than expensive alternatives already on the market, is undergoing stringent testing at Hero’s site.

Once plans are finalised, it will be made available in a flat-pack kit or as a downloadable design under Hero’s Insync family bike brand to enable more families with disabled children to enjoy the benefits of cycling.  The special needs trike will cost in the region of £500 compared with alternatives that start at around £5,000.

Les, from Ellenbrook, Worsley, made the original trike in his garden shed to enable 13-year-old neighbour Lewis Flint to get out on the roads with his parents, Dawn and Andy.

Seeing an opportunity to allow even more people to benefit, he knocked on the door of Abhishek Pratap Singh, head of Hero Global Design, and 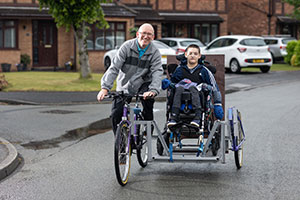 was given ten minutes to pitch his design.

Les said: “I talked my way into the office and showed Abhishek my plans for the trike and he said ‘everybody in the office gather around – this is why Hero has come to Manchester, to meet people like this’. I couldn’t believe it.”

Lewis, who has an undiagnosed genetic condition, communicates through an aid, has no independent mobility and relies on other people for his personal care. He enjoys rock climbing and skiing, but cycling was the one hobby his family had struggled with.

Les’s solution involves a ‘sidecar’ fitted to a bike, with a ramp to roll on the wheelchair. While Lewis is still enjoying his special needs trike, Insync’s designers have recreated it in a computer programme to allow them to make and test alterations before it is rolled out to others. Areas they have concentrated on have included the attachment points, the flatpack design and the width of the vehicle. Work has also been carried out on the advantages of using weight-saving materials and the stability and weight distribution of the outer platform.

Les said brainstorming sessions with Insync’s experts had proven useful to address problems such as the width of the special needs trike, which had always been its ‘Achilles heel’.

He said: “It might take ten goes for us to get the design right but bearing in mind we want this to go worldwide then we have to get it right. I’ve been amazed with the engagement and the interest we have had since the trike went public, which just shows that something like this is needed for disabled people.”

Prior to his link-up with Insync, Les teamed up with the University of Bolton, which incorporated the trike into its engineering degree course for two years.

Danny Evans, chief executive of Avocet Sports, the UK subsidiary of Hero Cycles, said they were keen to get the trike just right to benefit more people around the world.

He said: “Insync is a family bike brand and we want to support families to improve their health and quality of life through cycling. We were given a lot of confidence in the concept when we first unveiled it to the media in June and saw the story go viral with reports across TV, social media and newspapers. All the public comments online showed us how much goodwill and support there is for this trike in the UK and overseas to help improve the lives of children with special needs.

“We have been absolutely blown away by Les’s invention and his enthusiasm for helping Lewis. We now want to translate that and help families with a trike that is affordable. We have been told that the present trike models are way too expensive at £5000 for families with disabled children already shouldering a lot of additional costs.

“Our design team are making good progress with Les to develop his original design before we release it to a mass market, and we have already had interest from around the world. Insync Bikes’ partnership with Les matches our outlook and ethos to champion cycling as a force for good.”